It’s the last Tuesday in January. A dozen or so skiers from Pennsylvania are waiting for a lift ride to the top of a mountain in central Vermont. Its trails twist and turn through trees and remain mostly marked in moguls. One by one they make embark on an uphill voyage on a relic of yesteryear, the last single chair ski lift in the lower 48 states. For some it’s their first ride, others are veterans, but whichever is the case, in a few moments they’ll reach the top and ski Mad River Glen.

A decade ago I was living in Vermont and was working in the ski industry. Through numerous sources I had access to a lot of free and low-cost skiing, some of which were restricted but a lot were open to everyone, just not well advertised. Occasionally my friends from Pennsylvania would come up and we’d make use of whatever deals we could. Such was the case in 2006 when two of my buddies came up and we took advantage of the “Roll Back the Clock Day” at Mad River Glen, a day when tickets are just $3.50. 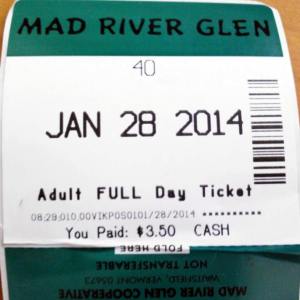 The autumn following that first trip I moved back to NEPA but the lure of cheap skiing and the lore of that inaugural adventure (which also took us to Jay Peak and Okemo) prompted us to go back and bring others. In addition to the deal at Mad River Glen, we picked up some vouchers for Killington and Mount Snow by attending the screening of the annual Warren Miller film at the Broome Co. Forum in Binghamton. We journeyed north, skied, and told more folks. This has perpetuated itself now for ten years. Our numbers have grown from three to over twenty, and through the years we’ve tacked on days at twelve Vermont resorts plus others in Massachusetts and New York. Where else we ski is largely determined by what discounts we can find, but Mad River Glen is always on the agenda and remains the focus of the trip.

MRG is something of an anachronism. Amidst the ever-expanding; state-of-the-art; full-service; all-amenities included style of resorts that cater to every possible whim of the vacationing snow sports enthusiast, it stands as the last bastion of bare bones; no frills; take-it-as-it-is skiing in all of the Northeast. It, along with Alta and Deer Valley (both in Utah) remain as the only resorts in the US that do not allow snowboarding, and thus is both praised and resented for that fact. Unique as well, it is owned by a Co-Op, not a private firm or a megalithic resort company, and it spends very little on marketing letting it’s supporters do most of the advertising simply by plastering it’s iconic red and white “Mad River Glen: Ski It If You Can” bumper stickers on cars, trucks, road signs, or whatever. I’ve met many seasoned skiers through the years that have never heard of the place and it doesn’t surprise me.

MRG’s only neighbor is Sugarbush, a moderate sized resort. Both are tucked away and more of a challenge to get to than other mountains. Both share some similarity in terrain but that’s about it. Where Sugarbush is modern, makes snow, and grooms its trails; Mad River is throwback; it relies solely on Mother Nature for its snow and only grooms its easiest slopes. Just as it’s loved or hated for its snowboard policy, MRG is hailed or condemned for its trail conditions….and that’s what draws us back year after year.

We fully know that we could show up to 7” of fresh powder or encounter rock hard ice and patches of bare ground, but for $3.50 we’ll take a gamble. More often than not things work our way. With an open woods policy and plenty of gladed terrain undoubtedly most of us take to the trees for exploration as much as technical skiing. Slipping into a sketchy chute we dodge spruce and birch trees through untracked snow and discover a frozen waterfall. Here we take a break and examine the cascade of ice before making out way back to a thin, winding trail that opens up to a steep bowl littered with moguls. After that, we breeze back to the bottom and jump in line for the Single Chair again.

Not everyone in our group has the desire to go crashing through the branches. Ages range from young adults to retirees and ability levels go from novice to expert but regardless we all find something there we like. Depending on the route taken down, a skier can meander back and forth across the mountain several times and take upward of a half-an-hour to make their way down witnessing spectacular scenery on the descent. No matter what, by 3pm most of us are spent. We’ll head back to our hotel, get ready for dinner, and compare stories about the day before planning out what to tackle the next day. In a few days we’ll be back on the Pocono slopes spinning out tales and undoubtedly someone new will be telling us they want to go on the next trip.