Most of the Delaware River from northeast Pennsylvania border with New York to just south of the borough of Delaware Water Gap falls under the jurisdiction of the National Park Service. The Upper Delaware Scenic and Recreational River covers the northern section while the Delaware Water Gap National Recreation Area presides over the southern part. In addition to the actual “river” the “Water Gap NRA” has an extensive collection of trails for biking, equestrian use, and hiking. The “Upper Del” is not so fortunate. The vast majority of the land abutting the river is private and hiking opportunities are scarce. There are a few areas of note for woodland ramblers to check out, one of which is the Tusten Mountain Trail.

Located about halfway between Narrowsburg, NY and Lackawaxen, PA, the Tusten Mountain Trail is a three-mile loop that offers a nice view of the valley as well as a wide array of other natural and manmade things to investigate. While not lengthy, it is definitely a moderate hike due to some steep sections as well as some rocky (and in winter, icy) terrain.

The trailhead is rather easy to find. Simply park at the Ten Mile River boat launch and look for the kiosk. Maps for the trail, provided by the Park Service are generally available there. The trail is located on private land owned by the Greater New York Councils of the Boy Scouts of America and is situated within the Ten Mile River Scout Camps approximate 14,000 acres. Several scout tent sites and lean-to areas are located along the trail. Please be respectful of the property and friendly to any scouts or other hikers you may encounter. This area of the scout camp is primarily used for weekend camping by scout troops that are canoeing on the river and for hiking. Additionally some weekday encounters with scouts can be expected in summer as this area is sometimes used by older scouts on multi-day backpacking treks. The campsites are available for use by scouting units, but are not open to the general public.

The trail officially begins at the kiosk and follows the dirt road along the Ten Mile River for a short distance before coming to a stone bridge. The bridge was constructed in 1875 and is a favorite subject for artists and photographers. Immediately after crossing the bridge are some ruins. Reeve’s Mills and Tusten were former villages that used to occupy this area. Here the trail gradually begins its ascent, still following the road for about another 0.4 miles. An abandoned quarry is visible on the right side of the road in this section. Immediately across the road is an old tailings pile from the quarry. Presumably, quarried stone was loaded onto sleds or carts and taken to market; the scrap was pushed to the side and left in piles. This is one of many tailings piles and quarries that dot the entire mountain. After a little bit, the road makes a quick descent. There is a large boulder on the right side of the road and a small vehicle turn-around to the left. 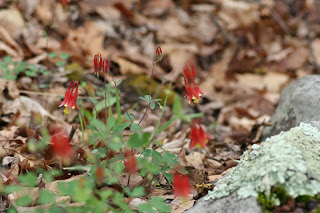 Here, turn right and proceed about 100 feet to a sign-in box. After signing in, hikers can choose to proceed directly to the summit by taking the left fork on the yellow trail or opting for a longer ascent on the red trail. The yellow trail rises sharply with only two short, flat sections. It involves some scrambling near the top. The red trail is rather flat until it meets up with the other part of the yellow loop. From the yellow/red intersection the trail is fairly gradual until it meets the cliff and then it gets rather steep and sketchy. Regardless of which way one takes to the top, crossing through this terrain will be necessary in order to complete the whole loop. Similarly, side trails and intersections can be found no matter if one hikes the loop clockwise, or counter-clockwise. Anyone hiking here should be wary of these side trails as some are not blocked off and a few lead miles away from the area. Others lead to private property and few, if any are marked or show up even on satellite maps.

The summit area has a great vista that overlooks the river. Several large slab rocks are perfect for a picnic or just a quick rest. Immediately below the summit is another old quarry and is worth exploring, but use care. A number of other quarries can be found in the way down from the summit by following the loop clockwise. Anyone hiking the trail in a counter-clockwise manner will encounter the other quarries on the way up.

Wintertime trekkers up Tusten Mountain should be prepared for ice. Snowshoes are not always needed, but boots and some sort of cleat (Yak-Trax, Kahtoolas, etc.) are suggested. Similarly, melting snow can make the trail muddy quite often throughout the winter. Rain runoff and seep make parts very muddy the rest of the year. Boots are not needed in warmer months, but they are not a bad idea.

Turkey and upland game birds are frequently seen in the area. Vultures are a common sight from the vista and eagle watchers should be on the lookout closer to the river. There are a number of Poplar trees in the area as well. Their white blossoms can frequently be seen in the spring along with Bluets, Violets, and Red Columbines. Great Rhododendrons also grow in the area along with Mountain Laurel. Due to the summer canopy, these bushes usually do not bloom. If they do, it is generally later in June and early July. Of course autumn is a wonderful time to explore this trail as well. There is a wide variety of hardwood trees on Tusten Mountain and each yield different hues from late September through the end of October. Although the trail is closed for a two week period during deer hunting season in late November and early December, Tusten Mountain offers something for every hiker year round.

All Photography By Bill Deaton.